(WorldKings.org) According to toptenz.net and bootsnall, this is top 10 geekiest bars on Earth.

1. The Hobbit Bar in New Zealand 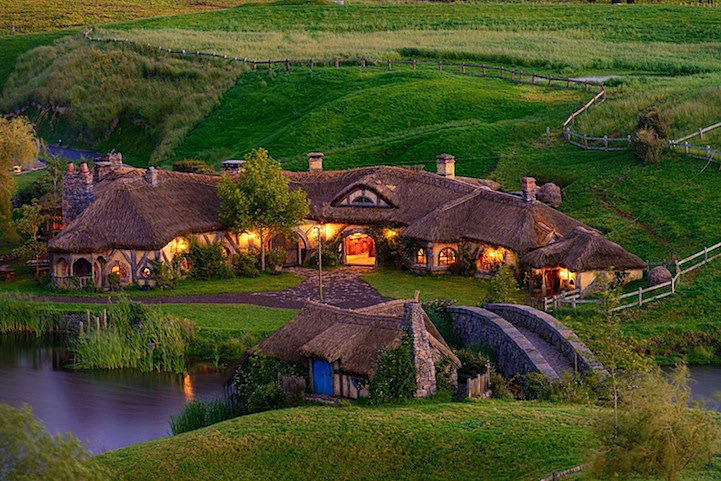 You can at least grab a drink at The Green Dragon, which recreates the exact look and feel of the pub seen in the Lord of the Rings movie series. 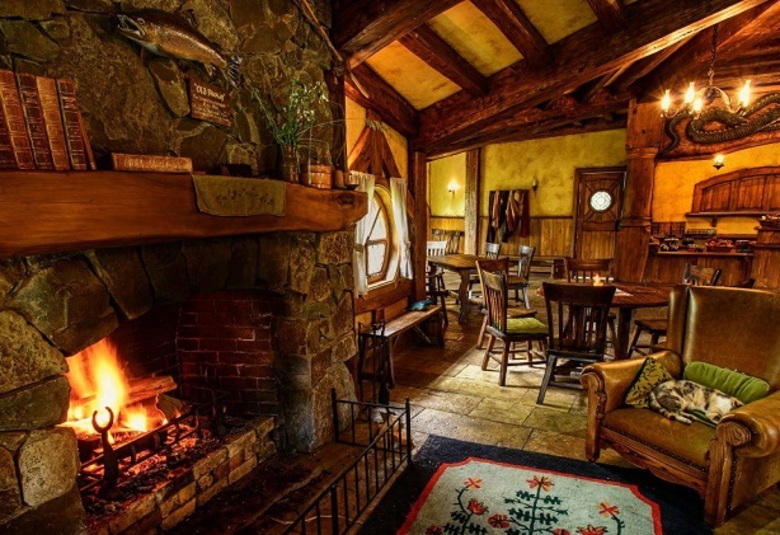 Best of all, this geektastic bar isn’t just stuck in a random strip mall, it’s actually located in Hobbiton, a tourist village built from the actual hobbit holes used in the Lord of the Rings films. The village was built in 1998 and turned into a tourist attraction in 2002, but it wasn’t until 2012 that the pub was added to give guests an even more Shire-like experience. 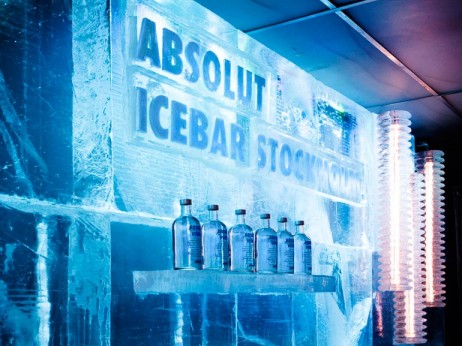 The very first bar to be made entirely of ice can be found in the small town of Jukkasjarvi in Sweden. Although novelty ice bars seem to be popping up everywhere these days, even in the baking hot Niger desert, the Absolut Icebar, within the Ice Hotel, is the original ice bar.

Guests don thermal capes and huddle together in freezing cold conditions surrounded by carefully-crafted ice sculptures. The ice is sourced from the Torne River in the village of Jukkasjarvi and the frosty bar is only open during the winter from December to April. 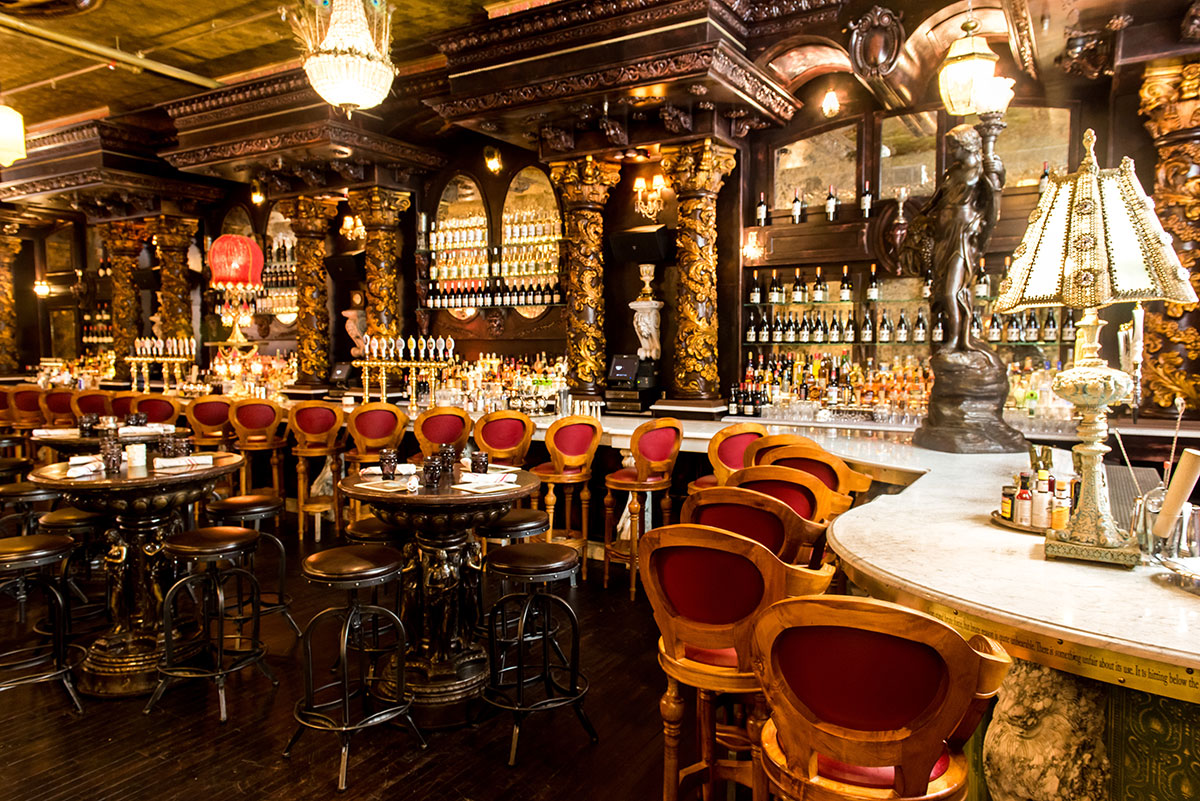 A new addition to the geek bar scene, Oscar Wilde NYC opened in June 2018. Even before it opened, the place made a big splash with its stunning Victorian decor that includes two antique fireplaces, classic marble statues, vintage photographs, and a 118.5 feet long bar – the longest one in New York City.

Naturally, there are also multiple statues bearing the likeness of Wilde himself. Cocktails focus on classic offerings that were popular during the 1800s-1920s, many based around champagne to reflect the opulence the famed writer was known for. 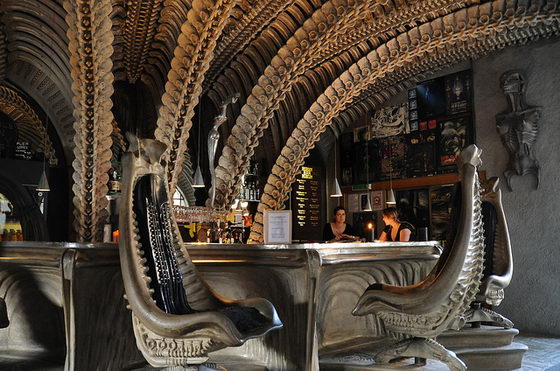 This odd museum-bar was designed by Swiss man Hans Rudi Giger who worked as a designer on the Oscar-winning Alien movies. Giger designed the title character, the human-eating Alien monster, and won an Oscar for best special effects in 1980.

The bar in Gruyere, Switzerland, will remind you of the alien – or perhaps sitting inside a monster’s stomach, with its spinal chord-like skeleton decoration.

The creepy, horror movie-inspired bar is decorated with skeleton bones throughout, from the walls and chairs to the flower vases. 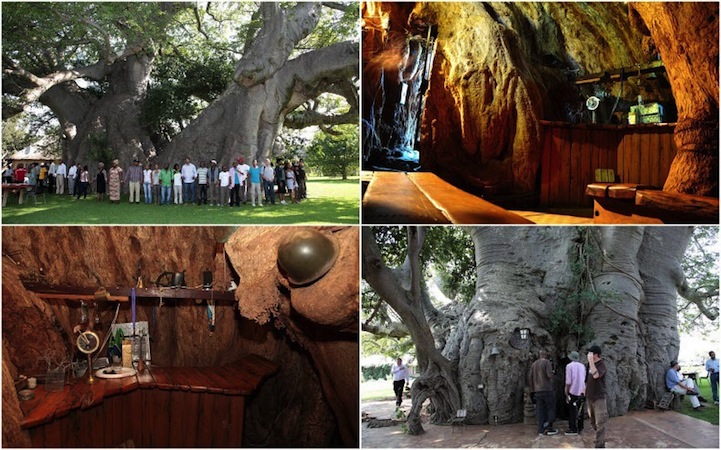 Drinking a beer inside a tree? You wouldn’t think anyone would even fit, but you will inside this 6,000 year old Baobab tree.The hollow 72-foot high tree offers a cool interior to step into from the heat outside and now has a bar, dart board and benches.

It was created in a Baobab tree in Sunland Farm in Limpopo to keep the thirsty locals happy and now thousands of tourists travel from miles around to have a pint in this interesting establishment.

The trunk has a 155-foot circumference and is wide enough to fit 40 people inside it. It even has its own cellar with natural ventilation to keep the beer cool! 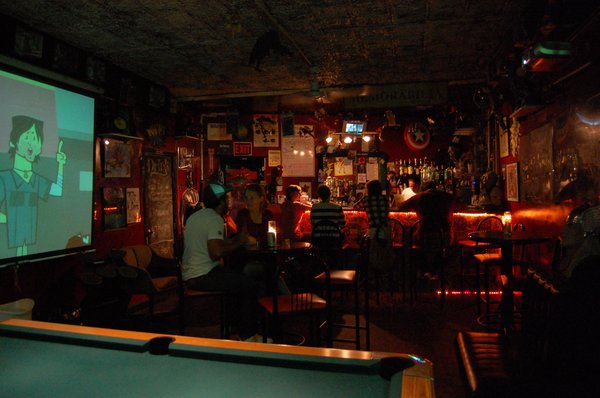 You may not ever start hanging out on rooftops and performing vigilante justice like a superhero, but thanks to the Gotham City Lounge in Brooklyn, you can at least enjoy a pretty cool secret lair where you can relax after a hard day of preserving truth, justice, and the American way throughout your daily routine. And don’t worry, Marvel fans – the proprietors and guests here support all superheroes, no matter their affiliation. 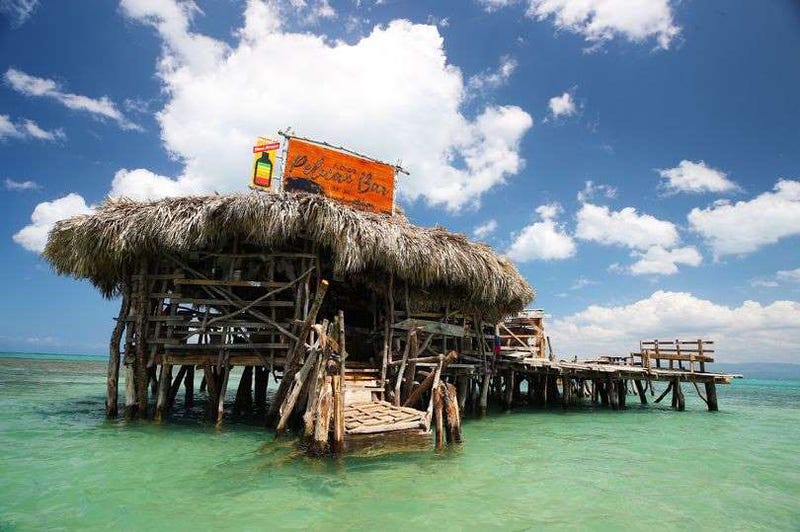 Floyds has to be the coolest bar in the Caribbean. Perched on stilts on a sandbar, Floyds is made completely of driftwood and palm leaves. Bring a sharp object and you can carve your name in the floor. It looks like it might fall over, but it’s surprisingly sturdy.

Floyds sits about a mile off the south coast of Jamaica in Parottee Bay and local fisherman will take you out there. There’s nothing like a cold beer in the middle of the ocean, doing a bit of snorkelling and enjoying a fresh lobster meal prepared by Floyd himself. 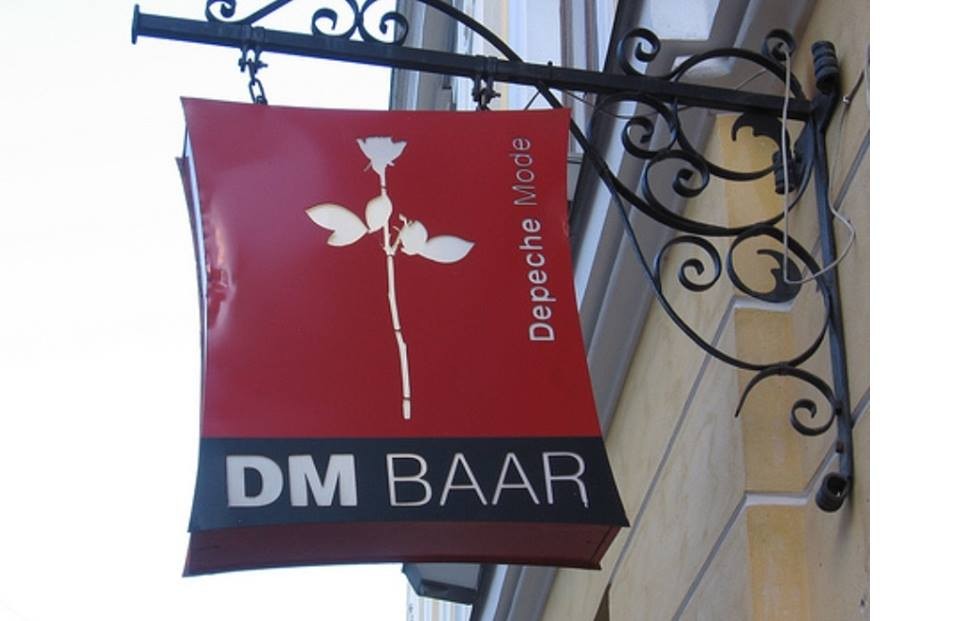 If you’re a huge fan and you just can’t get enough of Depeche Mode, this bar in the capital city of Estonia, Tallinn, is entirely devoted to the band.

It doesn’t seem the most obvious choice of band to dedicate a bar to, but the synth-poppers from Basildon in the UK are extremely popular anywhere east of Berlin. The bar’s walls are filled with Depeche Mode memorabilia and guess what’s on the playlist for the night? You guessed it, Depeche Mode songs.

Members of the band Martin Gore and Andy Fletcher have actually partied the night away in the bar which is sure to be one of the strangest hat tips to the band. 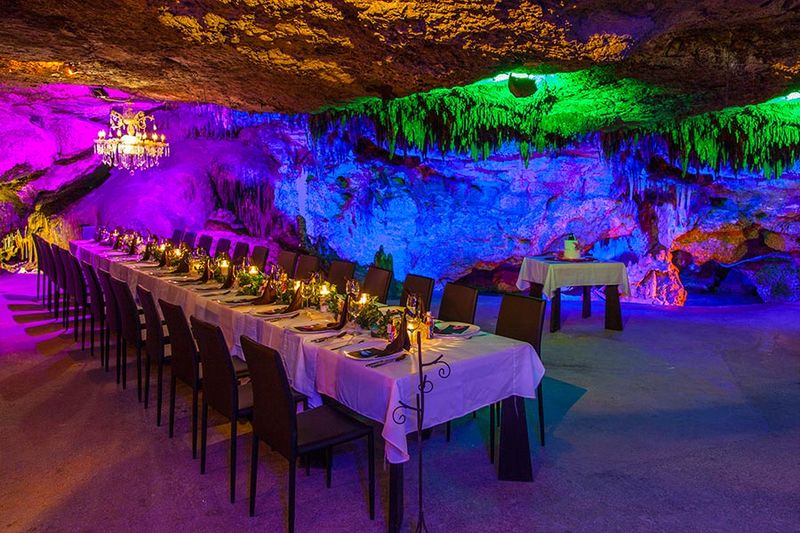 Alux, in Playa Del Carmen, is one of only two restaurants in the world inside a cavern. The whole Yucatan peninsula in Mexico is riddled with an interconnected system of caverns and subterranean rivers and after years of planning and restoration, Alux restaurant and lounge was opened for the public to enjoy this natural environment with a drink in hand.

The Flintstones-like cavern has numerous chambers where you can lounge, drink, dine, and dance amongst the stalagmites and stalactites, which are lit up in shades of violet, blue and pink. Small, magical beings called ‘Aluxes’ are said to occupy these caverns, so look out for one as you dance the night away! It’s a drinking spot you mustn’t miss if you’re staying in Playa Del Carmen. 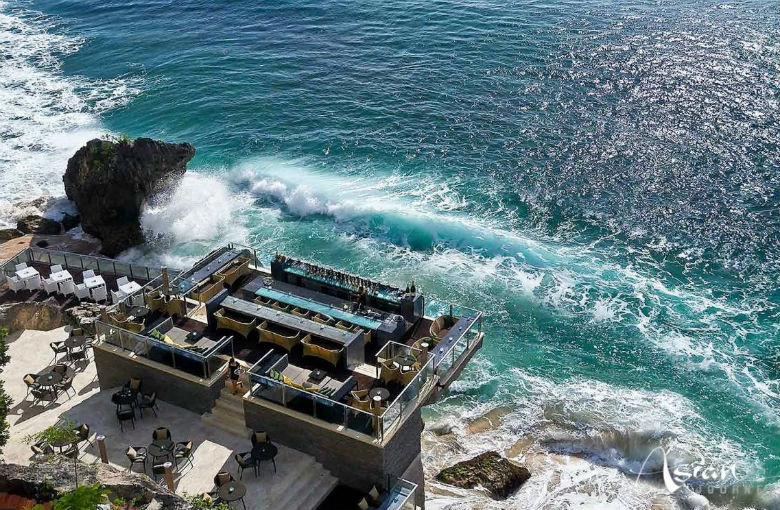 Perched 14 meters above the Indian Ocean, this open-top bar is literally served straight up on the rocks.

It’s a perfect place to sit and watch the sunset, sip cocktails and admire the view of the perfect Bali waves splashing against the rocks below. What makes it even more novel is the outdoor elevator which takes you down the cliff to the bar.

According to toptenz and bootsnall 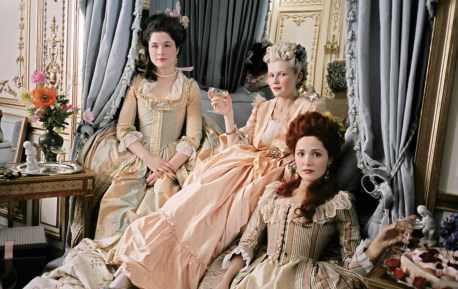 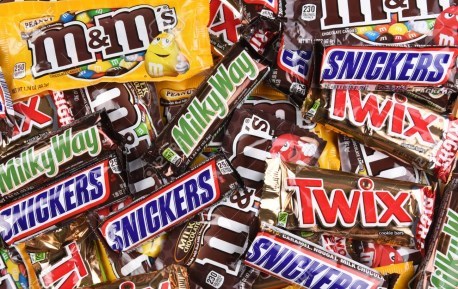 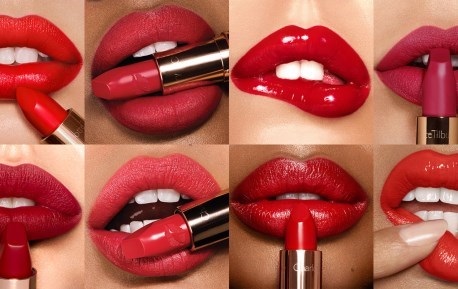 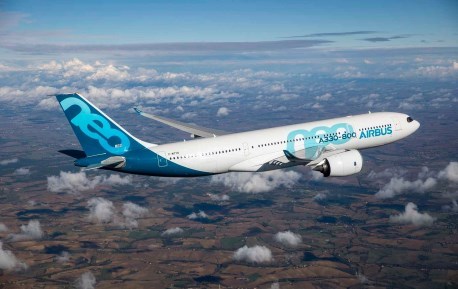 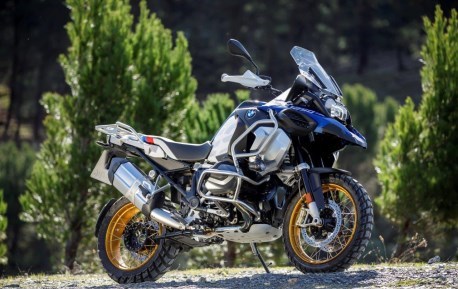 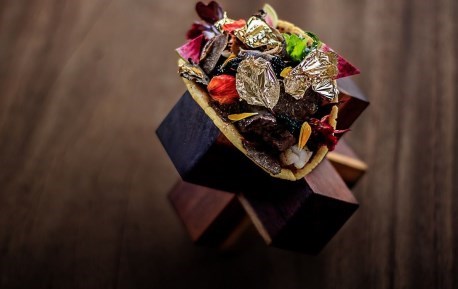