The Journey to promote the gastronomic's values all over the World : Japanese Food

(Wordkings) Japanese cuisine is vast and varied. Here are some examples of dishes frequently enjoyed across Japan. 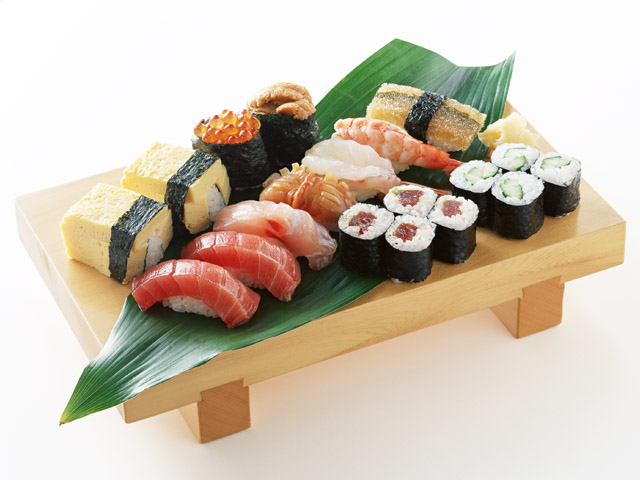 Sushi is the most famous Japanese dish outside of Japan, and one of the most popular dishes among Japanese. In Japan, sushi is usually enjoyed on special occasions, such as a celebration.During the Edo period, "sushi" referred to pickled fish preserved in vinegar. Nowadays sushi can be defined as a dish containing rice which has been prepared with sushi vinegar. There are many different types of sushi. Some popular ones are: 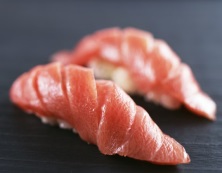 Small rice balls with fish, shellfish, etc. on top. There are countless varieties of nigirizushi, some of the most common ones being tuna, shrimp, eel, squid, octopus and fried egg.

Small cups made of sushi rice and dried seaweed filled with seafood, etc. There are countless varieties of gunkanzushi, some of the most common ones being sea urchin and various kinds of fish eggs.

Sushi rice and seafood, etc. rolled in dried seaweed sheets. There are countless varieties of sushi rolls differing in ingredients and thickness. Sushi rolls prepared "inside out" are very popular outside of Japan, but rarely found in Japan. 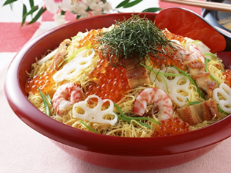 Chirashizushi is a dish in which seafood, mushroom and vegetables are spread over sushi rice. It can resemble domburi with the difference being that chirashizushi uses sushi rice while domburi uses regular, unseasoned rice. 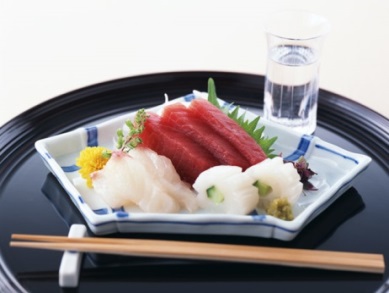 Sashimi is thinly sliced, raw food. It is one of the most famous dishes in the Japanese cuisine. Seafood is most commonly eaten as sashimi, but other types of meats (such as beef and horse) and foods (such as yuba tofu skin and konnyaku) can also be served as sashimi. Some people confuse sashimi with sushi. Unlike sashimi, sushi includes vinegared rice.

The slices of raw food are often presented arranged a top of a bed of shredded daikon and garnished with shiso leaves. At some restaurants, the rest of the fish is sometimes presented alongside the sashimi as decoration. 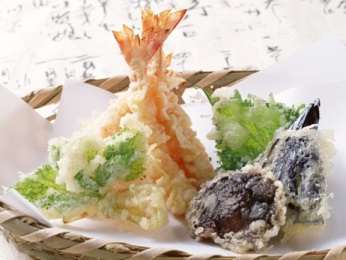 Tempura consists of seafood, vegetables, mushrooms, or meat coated with batter and deep fried. The resulting food has a light, but crispy texture, that may be seasoned with salt or dipped in a light sauce before eating. Tempura was introduced to Japan by the Portuguese in the 16th century, and has developed over the centuries into a popular Japanese dish both inside and outside of Japan.

Ramen is a noodle soup with various toppings. Ramen is one of the many popular dishes that were originally introduced from China but have become completely Japanized over time, and become one of the most popular dishes in Japan in recent decades. Ramen restaurant can be found in virtually every corner of the country and produce countless regional variations of this common noodle dish.

Ramen are typically categorized according to their soup base, although variations that combine the different bases are not uncommon. The main types of soup are:

a) Shoyu (Soy Sauce) Shoyu ramen soup is a clear, brown broth flavored with soy sauce (shoyu). The soup is usually made of chicken broth but often contains other meats such as pork, beef or fish depending on the region. Shoyu ramen is the most common type of ramen and is usually what is served when the menu does not specify a specific type of soup.

b) Shio (Salt) Shio ramen soup is a light, clear broth seasoned with salt. It is typically made from chicken broth, but may also be flavored with other meats such as pork.

c) Miso (Soybean Paste) Miso ramen soup is flavored with soybean paste (miso), resulting in a thick, brown soup with a rich, complex flavor. The style originated in Hokkaido where the long cold winters spurred the need for a heartier type of ramen soup, but it has spread to the point where it can be found pretty much anywhere in Japan.

d) Tonkotsu (Pork Bone) Particularly popular around Kyushu, tonkotsu ramen is made of pork bones which have been boiled down until they dissolve into a cloudy white broth. The thick, creamy soup is also often flavored with chicken broth and pork fat.

Soba are noodles made of buckwheat flour, roughly as thick as spaghetti, and prepared in various hot and cold dishes. Soba dishes are very popular and easily available nationwide. As 100% buckwheat soba noodles tend to be brittle, many restaurants add some wheat flour when preparing their noodles.

The most basic soba dish is mori soba in which boiled, cold soba noodles are eaten with a soya based dipping sauce (tsuyu). Many soba dishes are eaten throughout the year, while others are only available seasonally. A special kind of soba dish is Toshikoshi Soba, a symbol of longevity, that is only eaten on New Year's Eve.

Udon are thick Japanese noodles made of wheat flour. They are thicker than soba noodles, white and chewier. Udon is widely available at restaurants across Japan and prepared in various hot and cold dishes. The basic types of udon dishes are Zaru Udon, chilled and served on a bamboo mat and Kake Udon, served in a hot broth that covers the noodles. It also have many variations of toppings and serving styles, and some regional differences in terms of naming and seasoning. 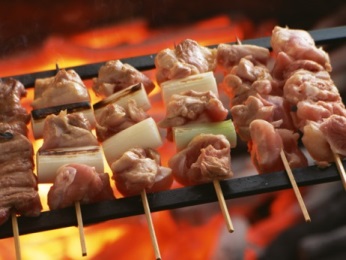 Yakitori are grilled chicken skewers made from bite sized pieces of meat from all different parts of the chicken, such as the breasts, thighs, skin, liver and other innards, seasoned with salt or sauce. Usually made to order and cooked over charcoal, yakitori is a popular, inexpensive dish commonly enjoyed together with a glass of beer. The best yakitori is served at specialty restaurants, known as yakitori-ya, but it can also be found at many other types of restaurants across Japan, such as izakaya, and at festival food stands. 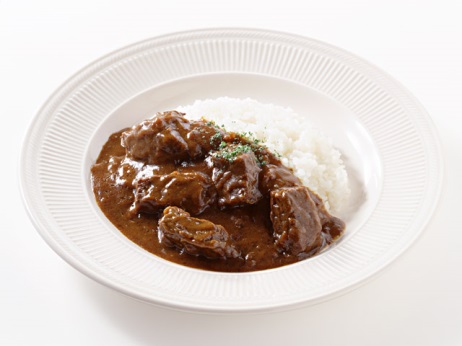 Japanese curry is a dish that is hugely popular in Japan. It is readily available at various restaurants, and many households cook it at home too. As the curry is usually served with rice, you would hear the term mentioned often.

After importing curry from India, the Europeans invented curry powder so that the layman could cook curry without having to master the intricacies about spices. This form of curry was introduced to Japan during the Meji Period (1868-1912), from which the Japanese adapted the dish to suit their tastes.

The usual ingredients added in Japanese curry include potatoes, carrots, onions and meat. The typical Japanese curry is thicker in texture and tastes sweeter but less spicy than its Indian counterpart.

Donburi (also romanized as Domburi) is a general term for "bowl". However, it also popularly refers to a bowl of cooked rice with some other food served on top of it. There exist a variety of donburi dishes, differing in their toppings. Some of the most popular ones are listed below:

a)Oyakodon (Oyako Donburi) Mother and Child Donburi
The name of this popular donburi dish comes from its two main ingredients, chicken and egg. Rarely, you may also encounter an Oyakodon featuring salmon and ikura (salmon eggs), instead.

c)Gyudon (Gyuniku Donburi) (more details) Beef Donburi
Gyudon, a bowl of cooked rice with beef, is very popular as an inexpensive type of fast food served at chain stores across the country. 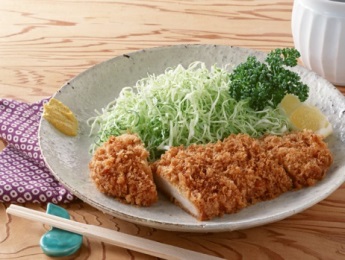 Tonkatsu ("pork cutlet") are thick slices of pork that are breaded and deep fried in a manner similar to German schnitzel. They are typically made from two cuts of pork: the lean and tender hire (tenderloin or filet) and the fattier rosu (loin). While tonkatsu is by far the most popular katsu dish, there are other variations made of chicken (chikinkatsu), beef (gyukatsu), ham (hamukatsu) and ground meat (menchikatsu).

Tonkatsu are usually served as a set meal (teishoku) with shredded cabbage, rice, miso soup and pickles. Diners can usually choose which cut they want (hire or rosu) when ordering. The slices of tonkatsu are eaten seasoned with mustard and a thickened type of Worcestershire sauce (tonkatsu sauce), which can either be drizzled over the tonkatsu or poured on the side for dipping. 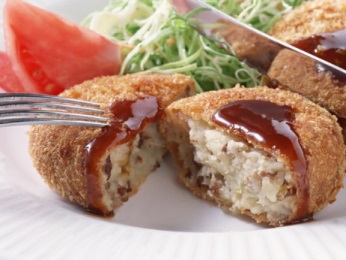 Korokke are a casual food similar to the French croquette, consisting of breaded, deep fried patties, typically filled with mashed potatoes or cream sauce. They come in a variety of flavors with various additions of vegetables, ground meat or seafood. Some parts of Japan also have their own regional korokke, featuring famous local ingredients such as beef or crab.

Plain potato korokke tend to be shaped into flat oval patties made of mashed potatoes, and might be flavored with ground meat or onions. Many other varieties of potato korokke are sold as well, and are typically named for their flavoring ingredients such as beef, pumpkin vegetable and curry.

Sukiyaki is a kind of hotpot dish prepared with thinly sliced meat, vegetables, mushrooms, tofu and shirataki (konyaku noodles) simmered in a sweet soy sauce broth. The pieces of food are dipped into raw beaten egg before being eaten.

Shabushabu is a typical Japanese style meat hot pot where pieces of thinly sliced meat, seafood, vegetables, mushrooms and tofu, are cooked by dipping them into a hot soup. The bite sized pieces are then dipped into a ponzu citrus or sesame sauce before being eaten.