(Worldkings) A grandfather who has spent his life ‘doing everything he wants’ has smashed a European record after completing a 100m race in just 32.79 seconds – at the ripe old age of 104 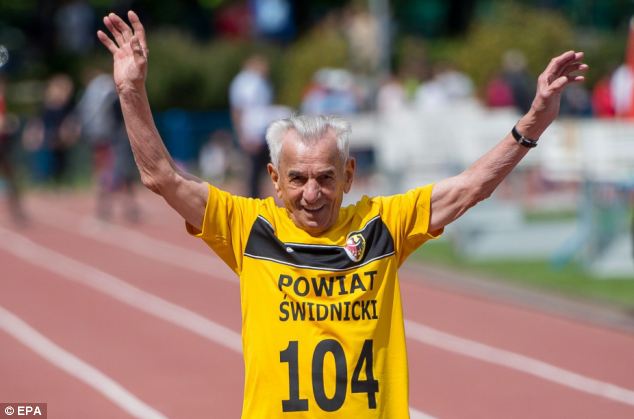 Stanislaw Kowalski, who was born in 1910, has become the oldest person in Europe to run a 100m race – smashing the record previously held by a 96-year-old.

Mr Kowalski, from Swidnica, Poland, finished the Men's 100m Centenarians Race at an athletics event held at the country’s Wroclaw Stadium in a speedy 32.79 seconds.

Despite never having had any professional training, he smashed his previous personal best of 34 seconds.

The centenarian puts his good health and incredible stamina down to doing ‘everything I want’ and ‘never going to the doctors’.

He said he spent most of his working life walking or cycling the 10km journey to work and only took up running as a hobby when he was 92.

Speaking after the race today, he said: ‘I feel like a new man.’

The keen runner, who over the last few years has started running 10km every day ‘whatever the weather’, wore a yellow jersey with the number 104 emblazoned on the front for the record-breaking race.

He is the only person over the age of 100 to ever complete the race, which was held at the Wroclaw stadium during the Youth Olympics.

The crowd clapped and cheered in support for Mr Kowalski as he made his way over the finishing line, ousting the current record holder – a Japanese man who completed the race in 28 seconds aged 96 several years ago.

He was presented with a bouquet of flowers and a trophy on the podium after the race – much to the delight of the cheering crowd.

Mr Kowalski, who now aims to compete in the Senior World Championships in Torun, said eating moderately contributed to his good health.

Asked for advice on how to live longer, he told Poland’s Gazeta Wyborcza: ‘Do not overfeed and do not eat at night. Sometimes you can drink 50 grams, but not every day.’

His grandson, Mark Baszak, added: ‘My grandfather always says “so as not to stress”. He is a very quiet man.’

Prior to the race, Polish athlete Marek Plawgo - a 400 metre runner and silver medallist in the 2006 European Championships – took to his Facebook page to wish the ‘great’ competitor luck.

He wrote: ‘The oldest European in history to complete a 100 metres run was 96 years old.

‘Stanislaw Kowalski, a resident of Swidnica, is now 104 and will attempt to establish a new European record in a category which has no participants.

‘This means that Mr. Kowalski is only obliged to finish to be a record holder!

‘We will be there at the Wroclaw AWF arena to cheer on the great sportsman.’