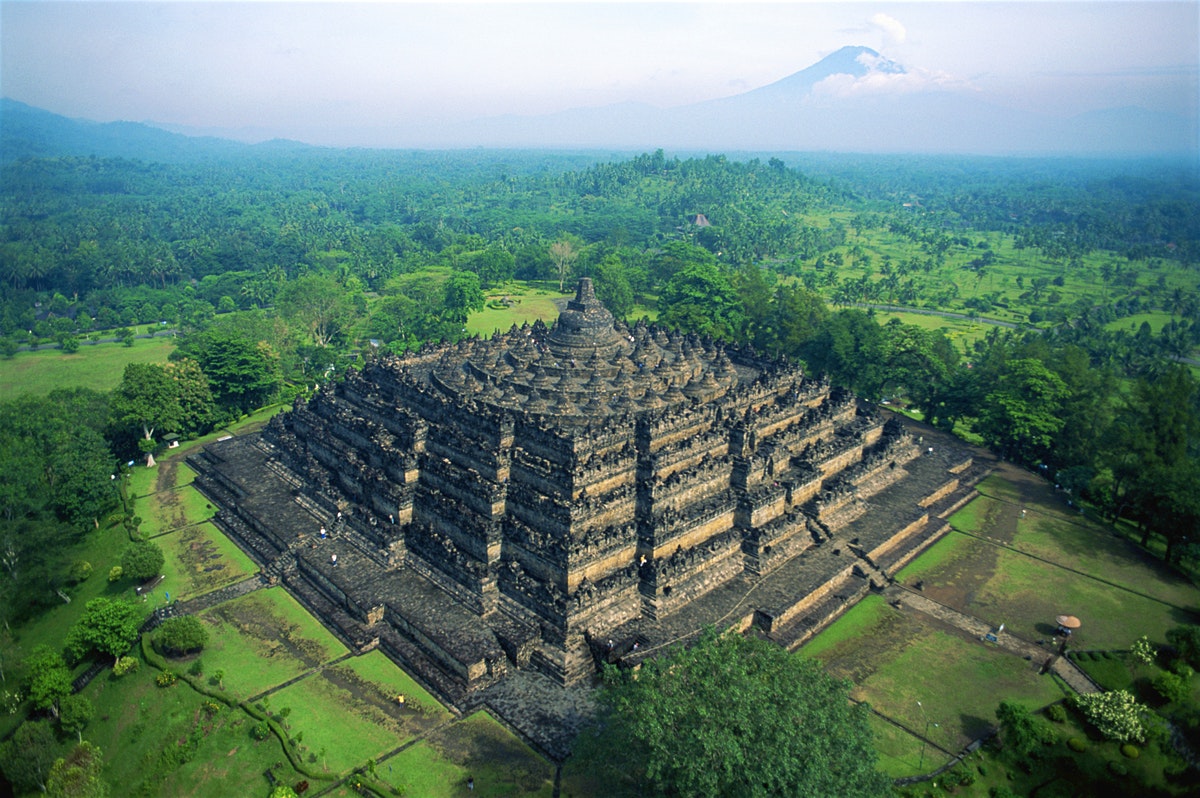 The temple consists of nine stacked platforms, six square and three circular, topped by a central dome. The temple is decorated with 2,672 relief panels and 504 Buddha statues. The central dome is surrounded by 72 Buddha statues, each seated inside a perforated stupa. 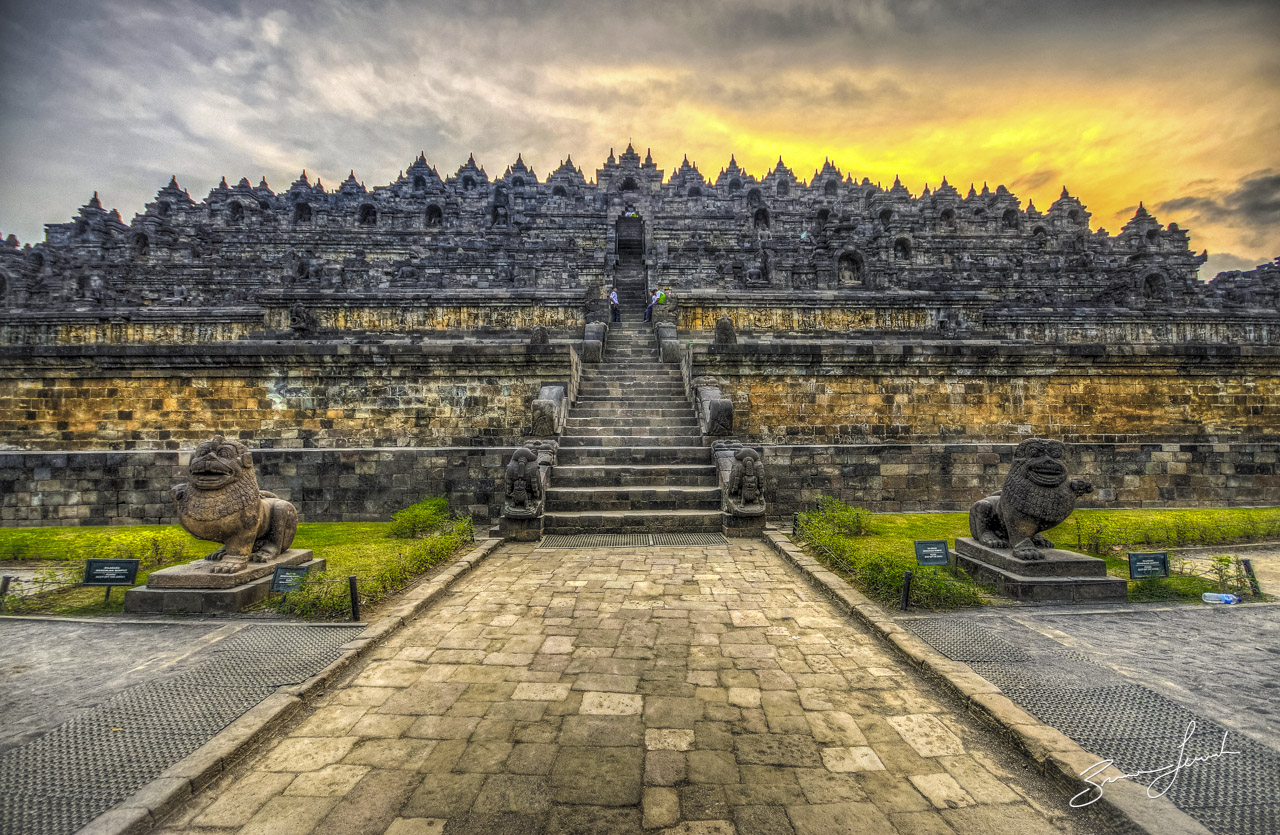 Built in the 9th century during the reign of the Sailendra Dynasty, the temple was designed in Javanese Buddhist architecture, which blends the Indonesian indigenous cult of ancestor worship and the Buddhist concept of attaining Nirvana. The temple also demonstrates the influences of Gupta art that reflects India's influence on the region, yet there are enough indigenous scenes and elements incorporated to make Borobudur uniquely Indonesian. The monument is both a shrine to the Lord Buddha and a place for Buddhist pilgrimage. The journey for pilgrims begins at the base of the monument and follows a path around the monument and ascends to the top through three levels symbolic of Buddhist cosmology: Kāmadhātu (the world of desire), Rupadhatu (the world of forms) and Arupadhatu (the world of formlessness). The monument guides pilgrims through an extensive system of stairways and corridors with 1,460 narrative relief panels on the walls and the balustrades. Borobudur has the largest and most complete ensemble of Buddhist reliefs in the world. 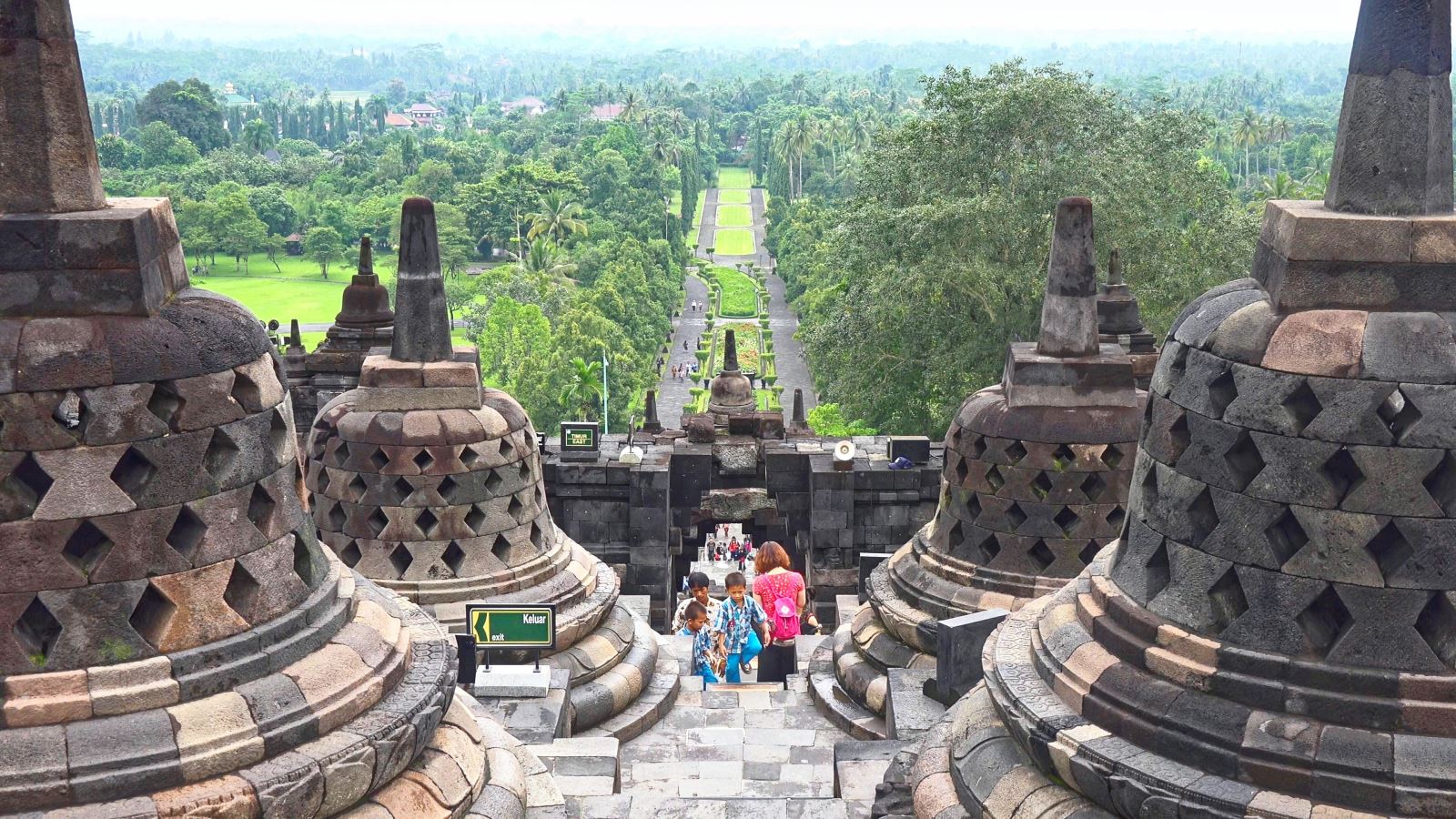 Evidence suggests Borobudur was constructed in the 9th century and abandoned following the 14th-century decline of Hindu kingdoms in Java and the Javanese conversion to Islam. Worldwide knowledge of its existence was sparked in 1814 by Sir Thomas Stamford Raffles, then the British ruler of Java, who was advised of its location by native Indonesians. Borobudur has since been preserved through several restorations. The largest restoration project was undertaken between 1975 and 1982 by the Indonesian governmentand UNESCO, following which the monument was listed as a UNESCO World Heritage Site. 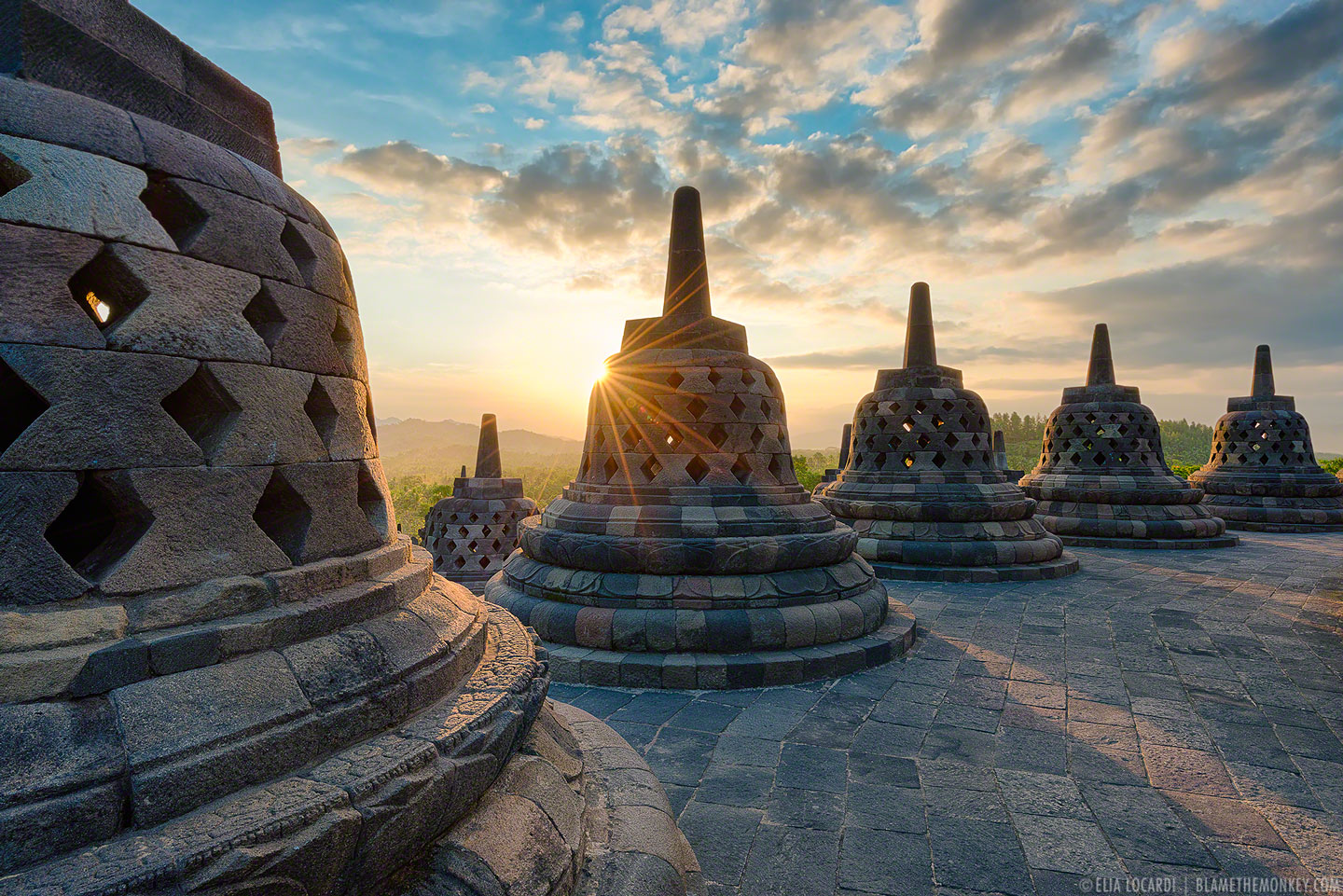 Borobudur is still used for pilgrimage; once a year, Buddhists in Indonesia celebrate Vesak at the monument, and Borobudur is Indonesia's single most visited tourist attraction. 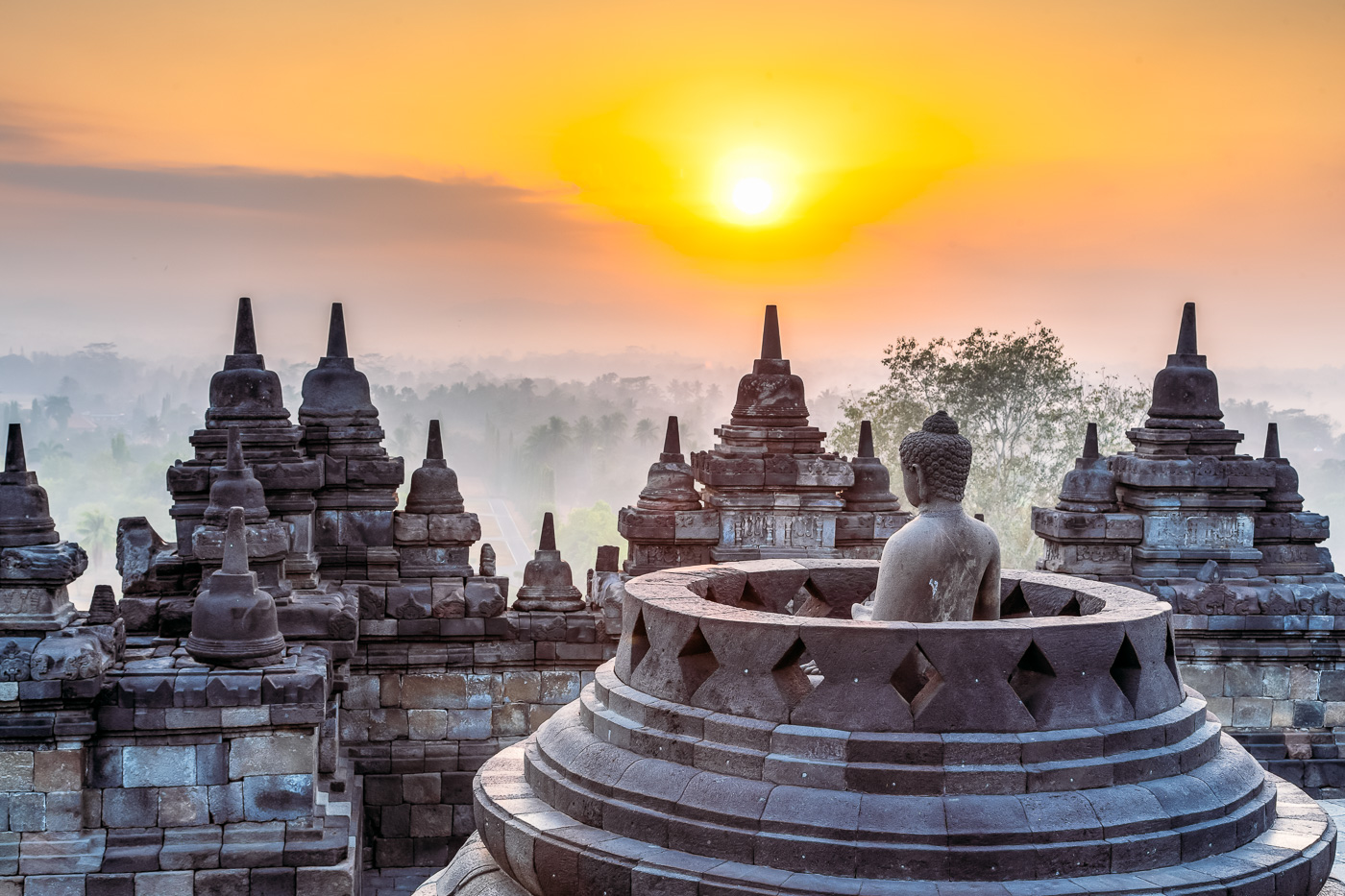 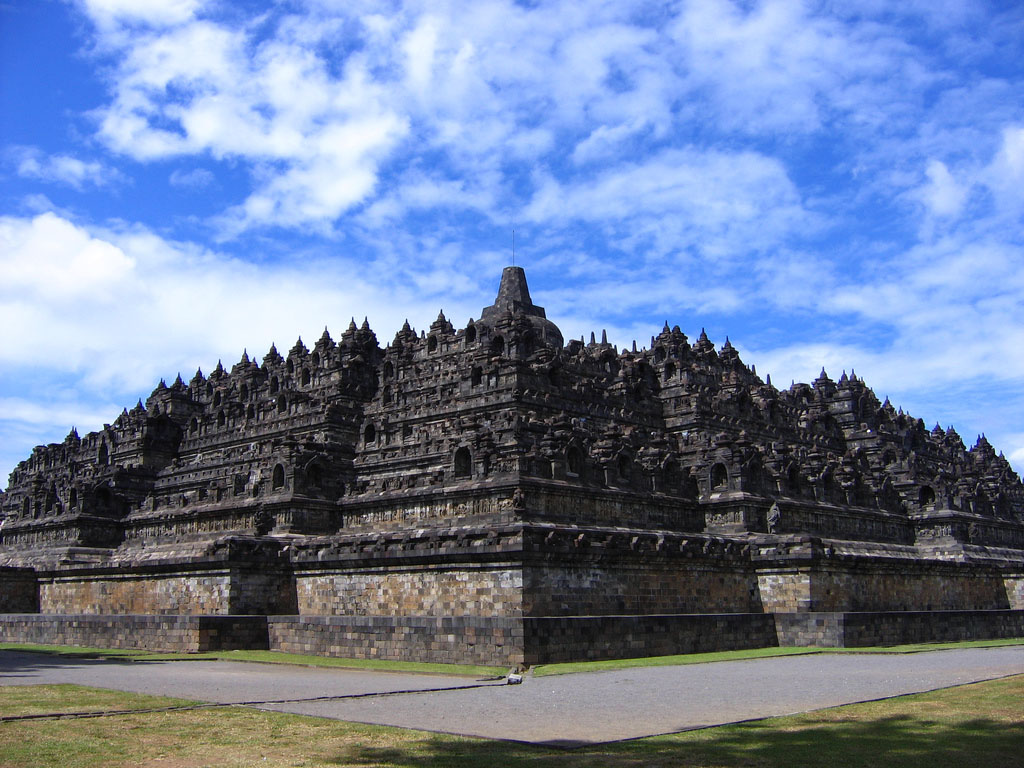