(WorldKings.org) It's not often the case that architects grow to become household names. But Frank Gehry has never lived by any common practice.

The award-winning architect has spent more than a half-century disrupting the very meaning of design within architecture. From the iconic Guggenheim Museum Bilbao (which Philip Johnson called “the greatest building of our time") to the Fondation Louis Vuitton in Paris, Gehry has proven time and again the force that's produced when whimsical design is done masterfully.

Born in Canada in 1929, Gehry attended the University of Southern California and the Harvard Graduate School of Design. He began his career in Los Angeles working for Victor Gruen Associates and Pereira and Luckman. After a brief stint in Paris working with Andre Remondet, he returned to California and started his own firm in 1962. Gehry was awarded the Pritzker Prize in 1989.

Here are some of his most iconic designs

Reflecting Gehry’s longtime passion for sailing, the structure’s exterior features expanses of stainless steel that billow above Grand Avenue, while inside, similarly shaped panels of Douglas fir line the auditorium. 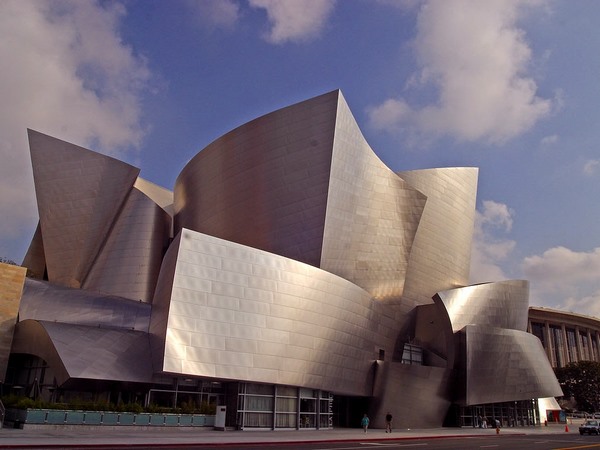 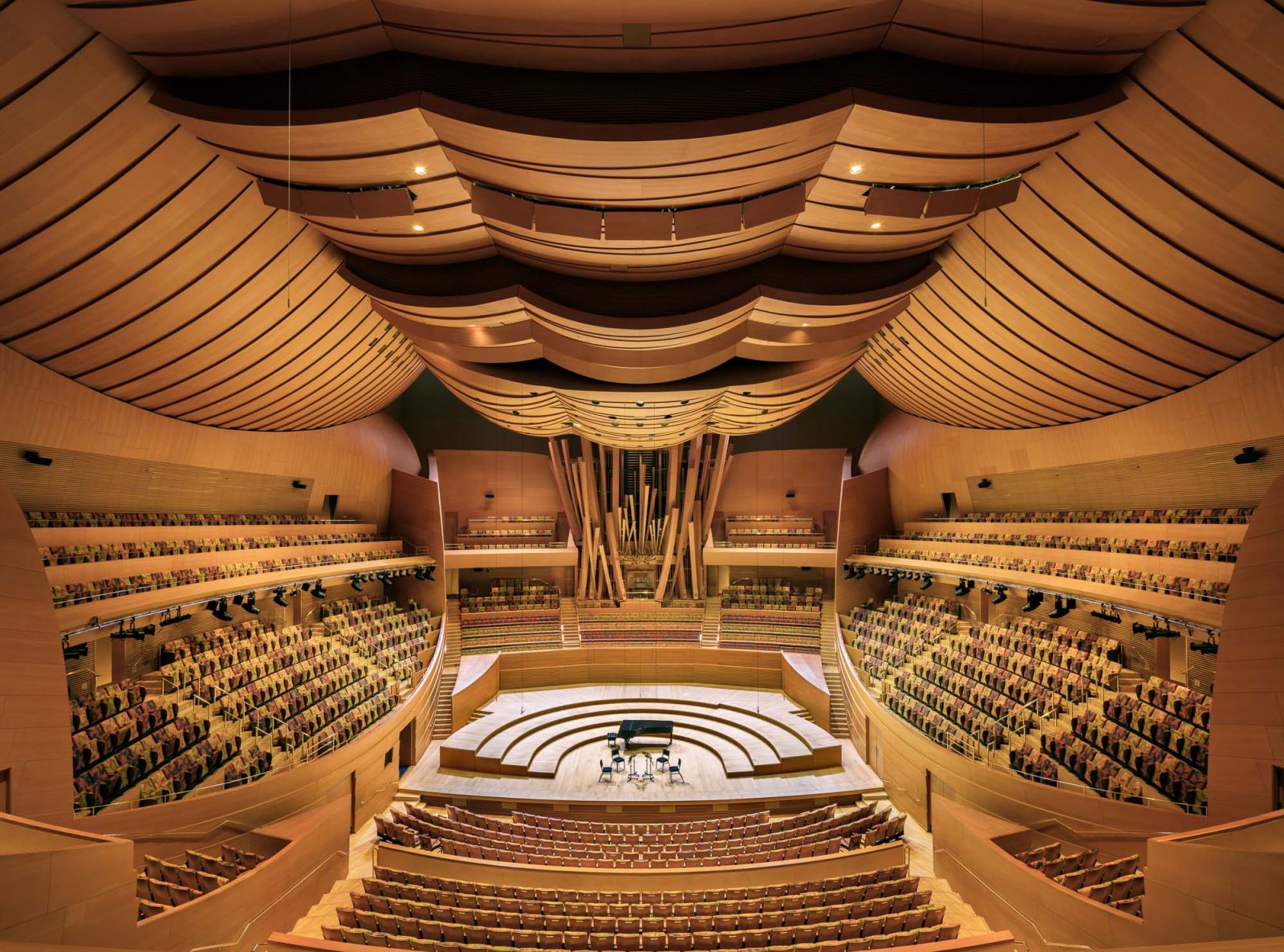 The 1991 Venice, California, complex that Gehry built for advertising agency Chiat/Day commonly goes by the nickname Binoculars Building, thanks to the enormous pair of binoculars that mark the entrance to a parking garage—a collaboration between Gehry and artists Claes Oldenburg and Coosje van Bruggen. Office structures resembling a ship’s prow and tree trunks flank the sculpture, which now welcomes 500 Google employees to work every day. 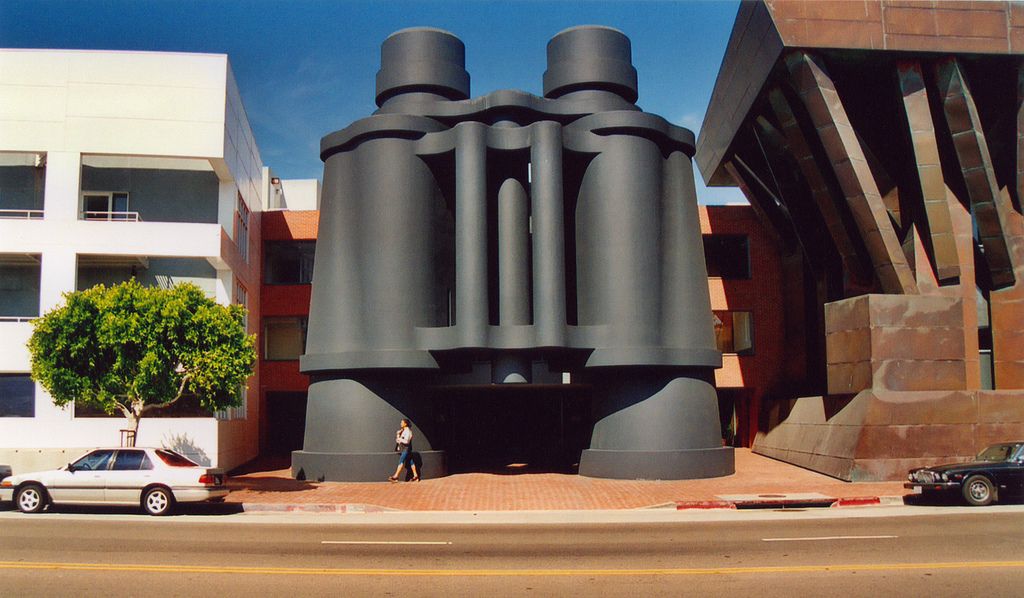 Gehry’s first significant brush with fame came with the 1978 construction of a Santa Monica residence he designed for himself and his family. The project wrapped an existing bungalow in angular volumes clad in a riot of everyday suburban materials like plywood and chain link. As opinionated as it was sculptural, the house earned both cheers and jeers in short order. In 2012 it won the American Institute of Architects’ prestigious Twenty-Five Year Award. 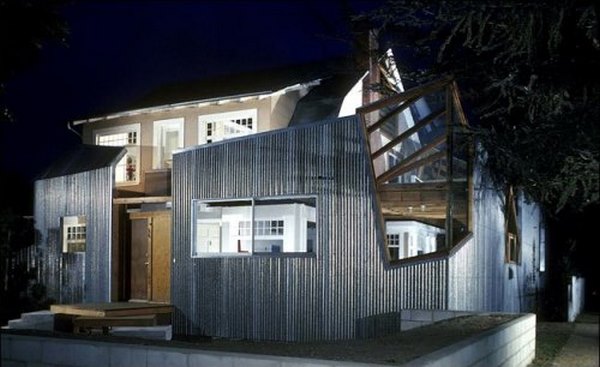 The 1978 commission to expand Loyola Law School would propel Gehry into institutional work. He reimagined Loyola’s downtown Los Angeles site as a neotraditional campus, arranging a stylistically diverse set of buildings and surrounding them with a knoll-like landscape. During initial design work, a strategy was developed to allow the expansion of the campus in several phases, cor­responding to the priorities of the school. The last phase of the design was completed in 2003. 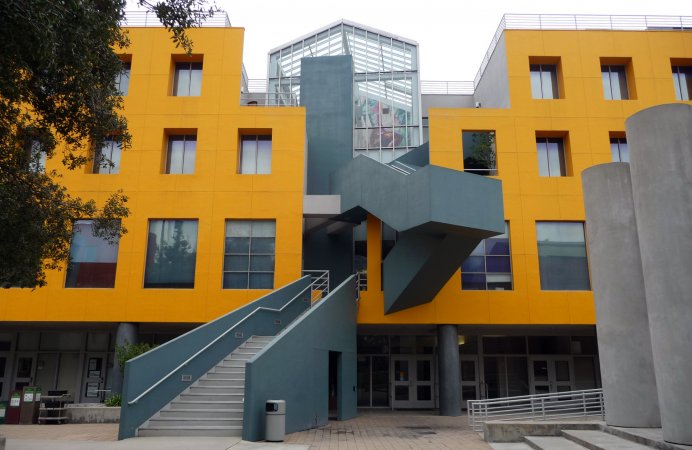 The Prague offices of the Dutch insurance company Nationale-Nederlanden is also known as Fred and Ginger, thanks to its signature pair of towers, which seem to resemble a couple dancing. The 1996 building, comprising a cinched volume of metal mesh and glass and a concrete cylinder, was a collaboration between Gehry and local architect Vlado Miluníc. 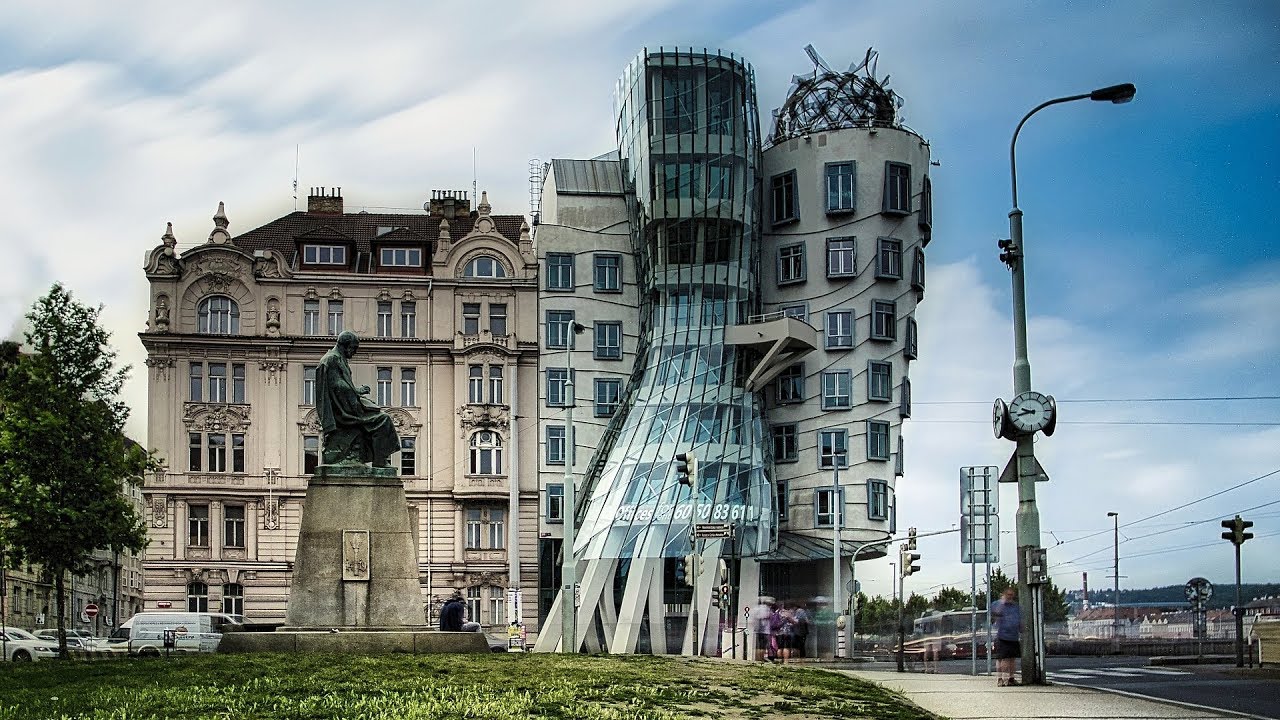 The Guggenheim’s satellite in Bilbao, Spain, multiplied the museum’s exhibition space in a mountain of stone, glass, and titanium that follows the contours of the Nervión river. Design and construction of the Guggenheim Bilbao went largely unnoticed in the press, so the building’s 1997 opening produced an explosion of publicity, securing Gehry’s place as a master among architects and jolting the Bilbao economy. 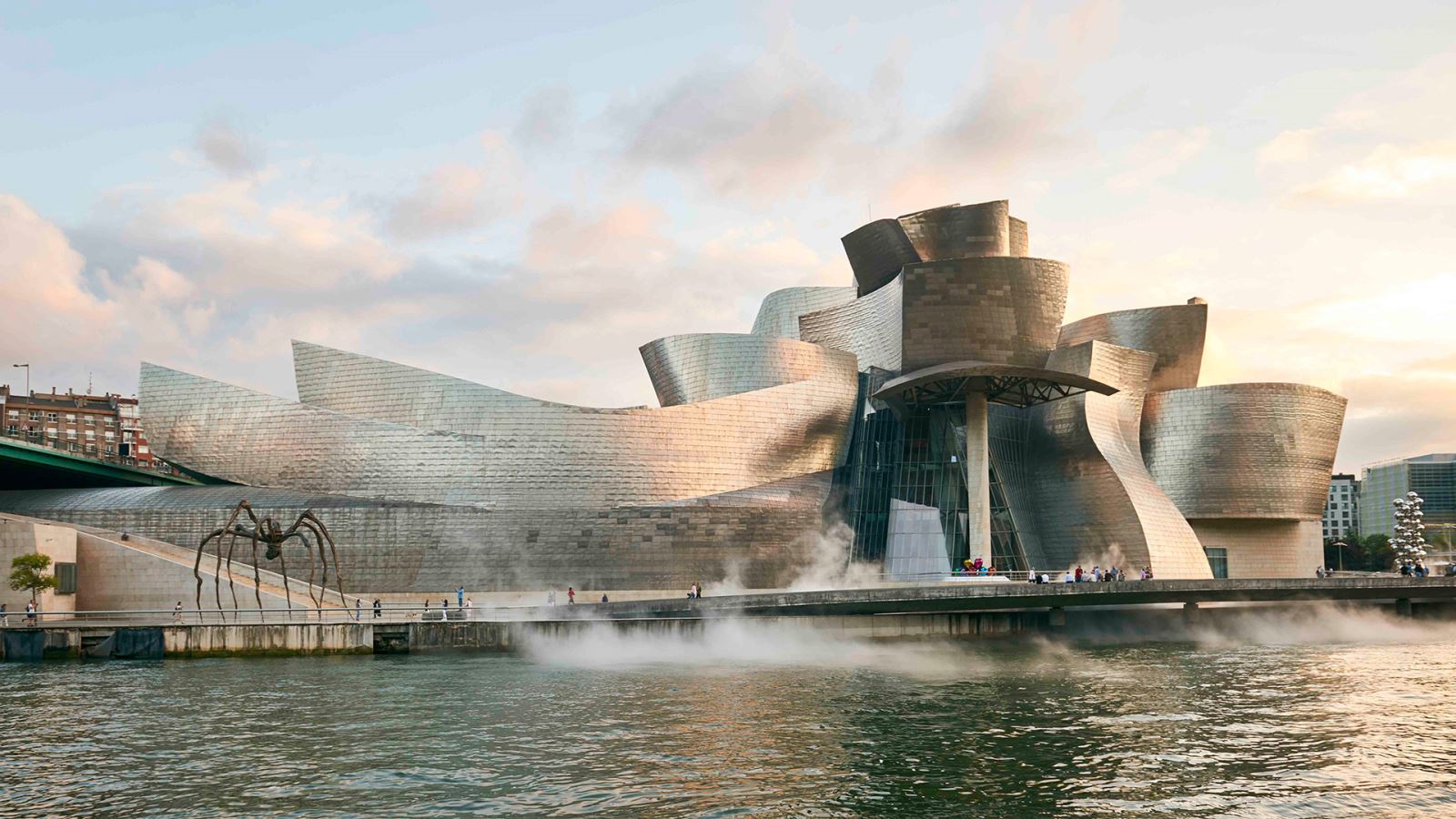 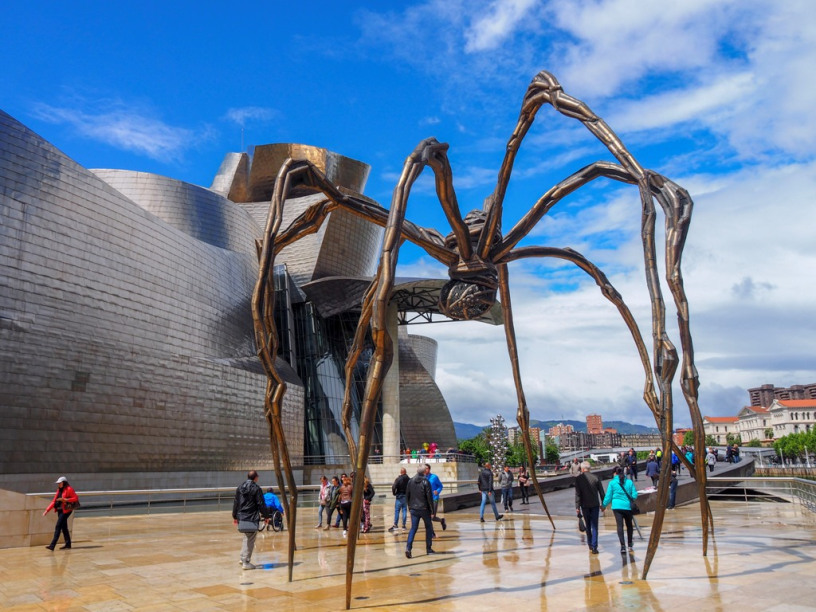 At the base of the Space Needle, Gehry framed the EMP Museum to look as if its steel-and-aluminum skin is flapping in the wake of Seattle’s famous monorail. The EMP Museum is the brainchild of Microsoft cofounder Paul Allen, and, upon its completion in 2000, was inaugurated as the Experience Music Project. Gehry’s first model of the museum was built from sliced-up guitars.

Gehry realized his first Manhattan building in 2007, with the completion of the InterActiveCorp headquarters in the city’s Chelsea neighborhood. The nine-story edifice was also his first major glass building, and crews bent that material on site to capture the swelling effects in his sailboat-like design. 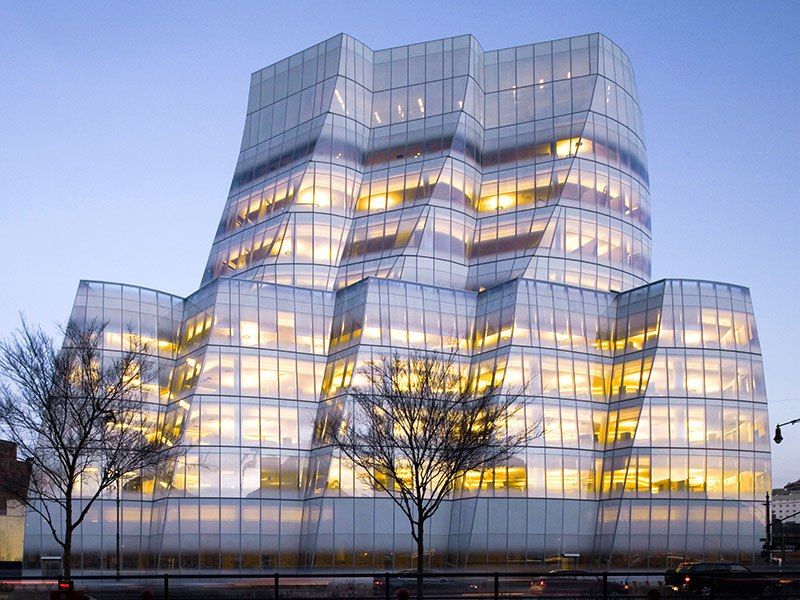 In the late 1990s, Panamanian leaders, hoping to produce their own “Bilbao Effect,” began speaking with Gehry about designing an ecology museum. But it wasn’t until 2013 that the project was finally realized. The newly opened Biomuseo marks Panama City’s Amador Causeway with a colorfully crumpled roofline, held in place by what appears to be an oversize billboard structure. Revealing underlying armature is a traditional Gehry trope, but his uncharacteristic choice of reds, greens, and other bold hues is a direct nod to Panama's diverse flora and fauna. 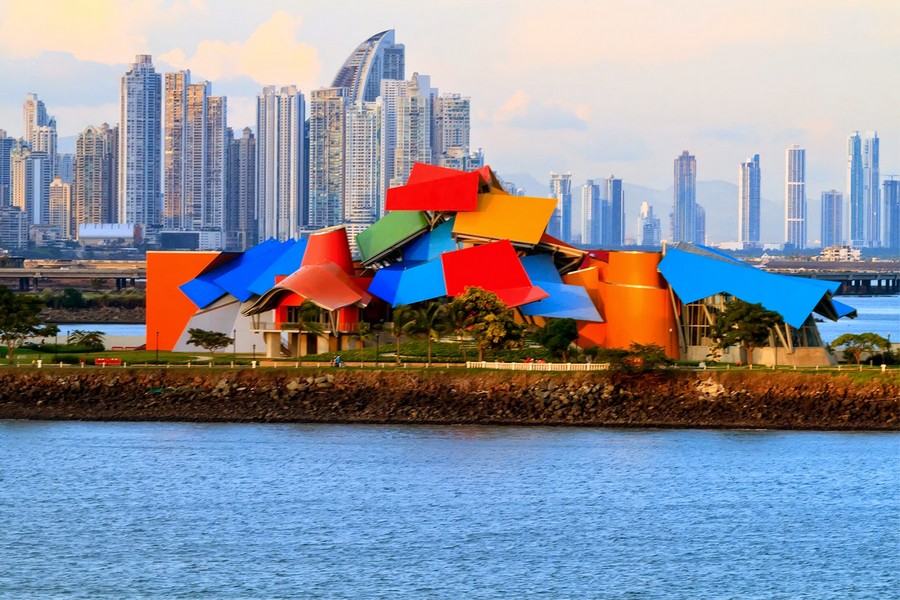 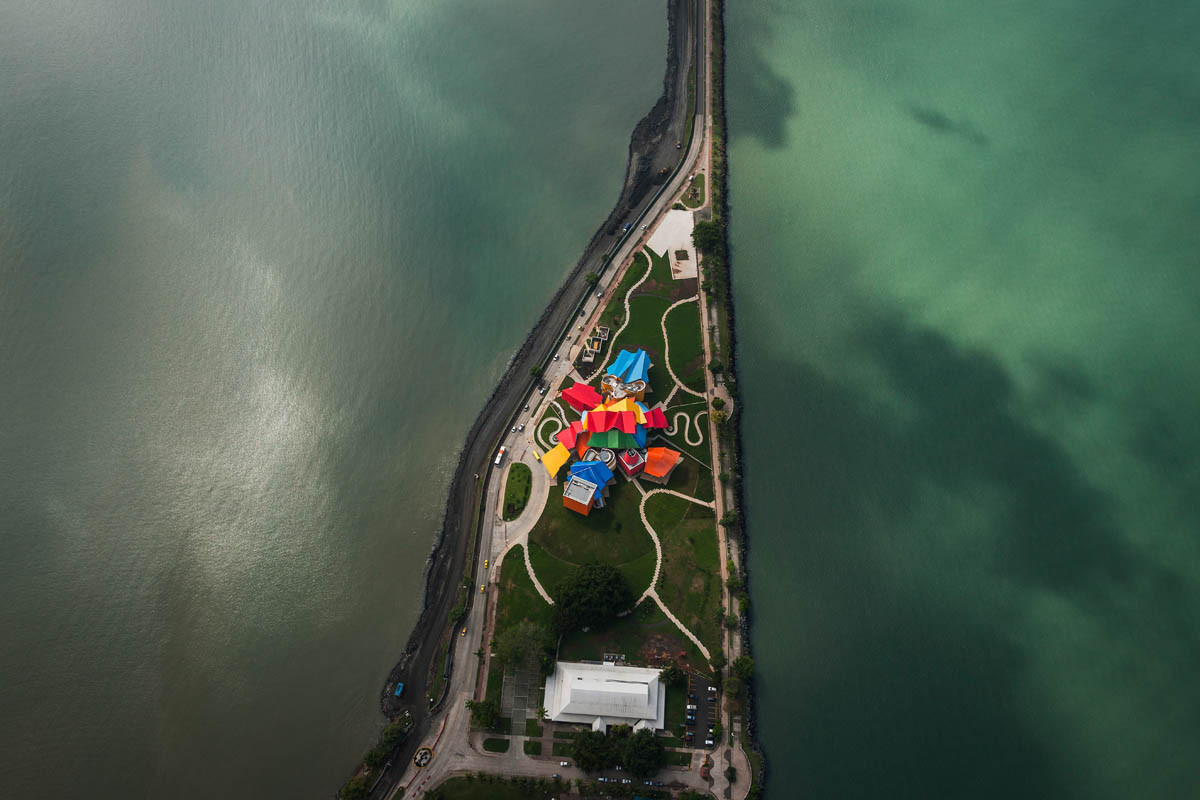 The Dr. Chau Chak Wing Building at the University of Technology Sydney Business School, which opened in 2015, is Gehry’s first project in Australia. The undulating brick building includes a number of sustainability features throughout its 11 floors. 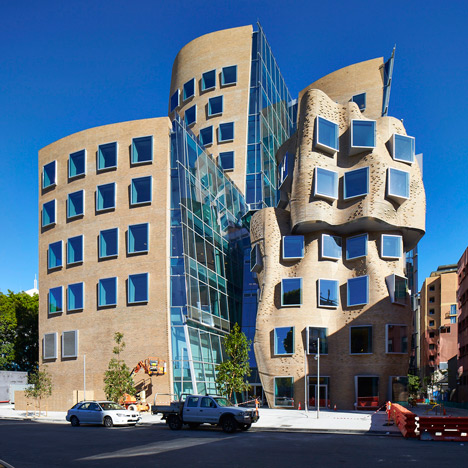 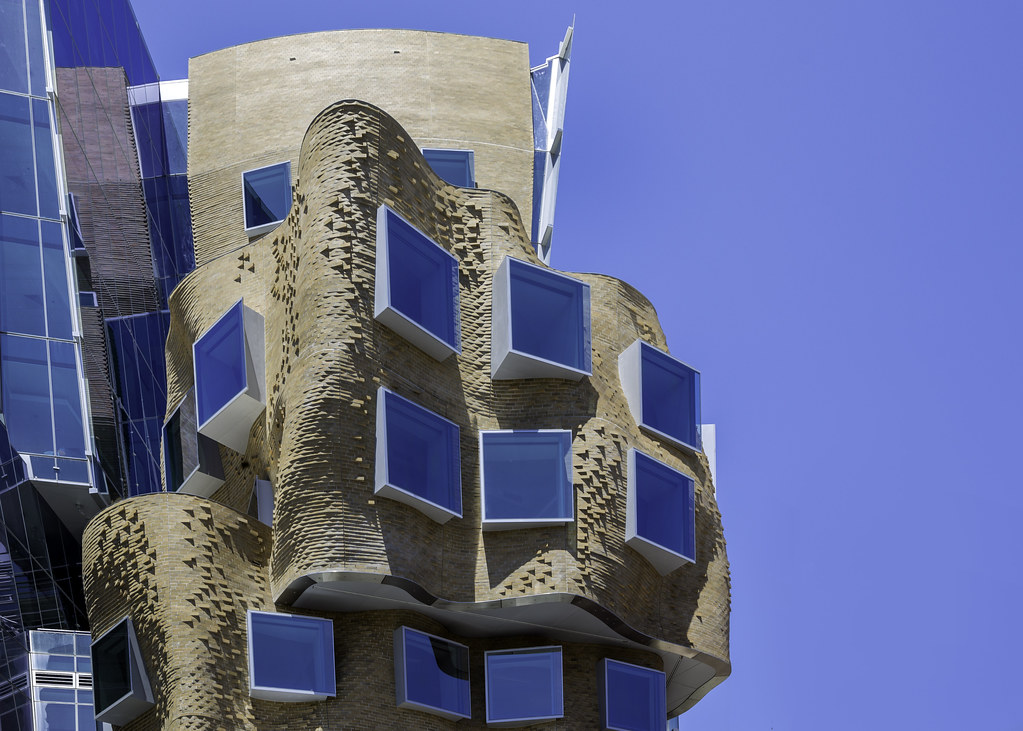 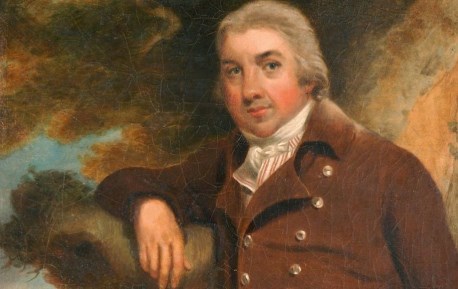 [WORLDKINGS] Journey to seek extraordinary record holders around the world (P.13) - Edward Jenner (England) : the pioneer of the first vaccine. 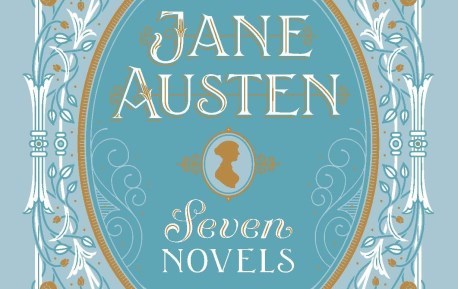 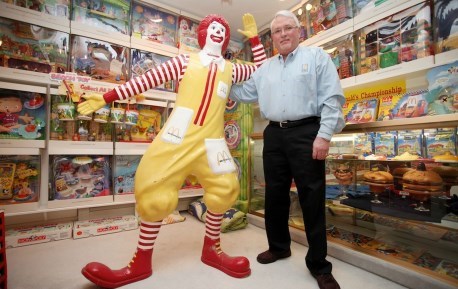 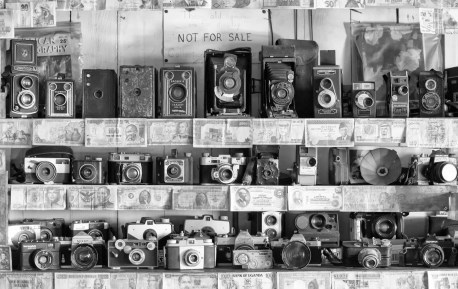 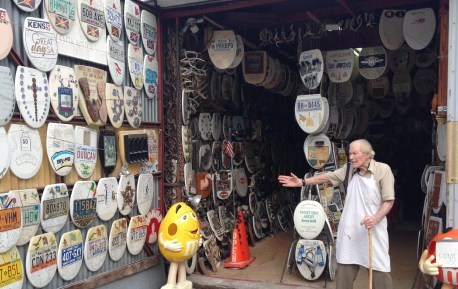 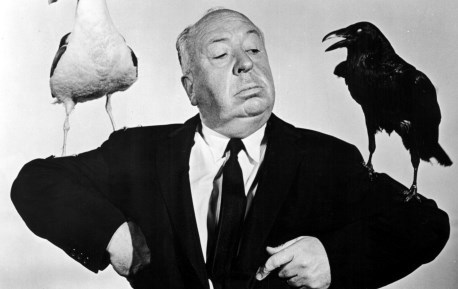 [WORLDKINGS] Journey to seek extraordinary record holders around the world (P.11) - Alfred Hitchcock: The master of suspense, one of the most influential and extensively studied filmmakers in the history of cinema.