(Worldkings) While thousands of climbers have successfully scaled Mount Everest, the highest point on Earth, only two people have descended to the planet’s deepest point, the Challenger Deep in the Pacific Ocean’s Mariana Trench.

Located in the western Pacific east of the Philippines and an average of approximately 124 miles (200 kilometers) east of the Mariana Islands, the Mariana Trench is a crescent-shaped scar in the Earth’s crust that measures more than 1,500 miles (2,550 kilometers) long and 43 miles (69 kilometers) wide on average. The distance between the surface of the ocean and the trench’s deepest point—the Challenger Deep, which lies about 200 miles (322 kilometers) southwest of the U.S. territory of Guam—is nearly 7 miles (11 kilometers). If Mount Everest were dropped into the Mariana Trench, its peak would still be more than a mile (1.6 kilometers) underwater.

The Mariana Trench is part of a global network of deep troughs that cut across the ocean floor. They form when two techtonic plates collide. At the collision point, one of the plates dives beneath the other into the Earth’s mantle, creating an ocean trench.

The depths of the Mariana Trench were first plumbed in 1875 by the British ship H.M.S. Challenger as part of the first global oceanographic cruise. The Challenger scientists recorded a depth of 4,475 fathoms (about five miles, or eight kilometers) using a weighted sounding rope. In 1951, the British vessel H.M.S. Challenger II returned to the spot with an echo-sounder and measured a depth of nearly 7 miles (11 kilometers).

The majority of the Mariana Trench is now a U.S. protected zone as part of the Mariana Trench National Monument, established by President George W. Bush in 2009. Permits for research in the monument, including in the Sirena Deep, have been secured from the U.S. Fish and Wildlife Service. Permits for research in the Challenger Deep have been secured from the Federated States of Micronesia.

Because of its extreme depth, the Mariana Trench is cloaked in perpetual darkness and the temperature is just a few degrees above freezing. The water pressure at the bottom of the trench is a crushing eight tons per square inch—or about a thousand times the standard atmospheric pressure at sea level. Pressure increases with depth.

The first and only time humans descended into the Challenger Deep was more than 50 years ago. In 1960, Jacques Picard and Don Walsh reached this goal in a U.S. Navy submersible, a bathyscaphe called the Trieste. After a five-hour descent, the pair spent only a scant 20 minutes at the bottom and were unable to take any photographs due to clouds of silt stirred up by their passage.

Until Piccard and Walsh’s historic dive, scientists had debated whether life could exist under such extreme pressure. But at the bottom, the Trieste‘s floodlight illuminated a creature that Piccard thought was a flatfish, a moment that Piccard would later describe with excitement in a book about his journey.

“Here, in an instant, was the answer that biologists had asked for the decades,” Piccard wrote. “Could life exist in the greatest depths of the ocean? It could!”

WAITING IN THE DEEP

While the Trieste expedition laid to rest any doubts that life could exist in the Mariana Trench, scientists still know very little about the types of organisms that reside there. In fact, some question whether Piccard’s fish was actually a form of sea cucumber. It is thought that the pressure is so great that calcium can’t exist except in solution, so the bones of vertebrates would literally dissolve. No bones, no fish. But nature has also proven scientists wrong many times in the past with its remarkable capacity for adaptation. So are there fish that deep? Nobody knows, and this is the whole point of the DEEPSEA CHALLENGE project, to find answers to such fundamental questions.

In recent years, deep-ocean dredges and unmanned subs have glimpsed exotic organisms such as shrimp-like amphipods, and strange, translucent animals called holothurians. But scientists say there are many new species awaiting discovery and many unanswered questions about how animals can survive in these extreme conditions. Scientists are particularly interested in microorganisms living in the trenches, which they say could lead to breakthroughs in biomedicine and biotechnology.

The Mariana Trench’s microscopic inhabitants might even shed light on the emergence of life on Earth. Some researchers, such as Patricia Fryer et alat University of Hawaii, have speculated that serpentine mud volcanoes located near ocean trenches might have provided the right conditions for our planet’s first life-forms. Additionally, studying rocks from ocean trenches could lead to a better understanding of the earthquakes that create the powerful and devastating tsunamis seen around the Pacific Rim, geologists say. 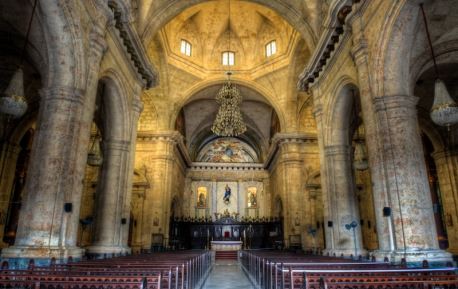 The Journey to Promote the National Symbols in the World No.19: Cuba- the Cathedral of La Habana

The Journey to Promote the Immutable Records in the World No.19: Cherrapunji- the wettest spot on earth

The Journey to Promote the National Symbols in the World No.18: Colombia- the Teatro de Cristobal Colon

The Journey to Promote the Immutable Records in the World No.18: Atacama Desert- the driest spot on Earth